It is located in Murano, an island renowned throughout the world for the excellence of its glass-making tradition. The museum in question is the Glass Museum which, after finding a permanent home in 1861 amidst the frescoed rooms of the former diocese of the archbishop of Torcello, continued to expand. 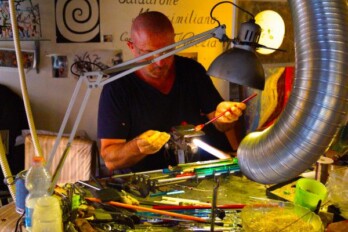 A large number of antique and contemporary glass pieces, donated by Murano-based glass factories, were added to the original archives. The museum’s collection was further enriched by glass objects from the Correr, Cicogna and Molin collections, which include several beautiful Renaissance pieces, as well as an archaeological section.
The items displayed are arranged chronologically starting from relics dating back to Roman times (1st/5th centuries A.D.). The exhibition explores seven hundred years of the history of Murano glass, with pieces produced from the 4th century to the present when the appeal of glass as a medium of expression became one of the themes of experimentation and a privileged tool of interpretation used by many artists and designers.

An exhibition space in its own right is represented by the former Conterie, an industrial glassmaking complex that has been transformed into a fascinating white cube, in which an original ‘Timeline’, consisting of fifty objects from the Roman era to the 20th century, mark the most important stages in the history of Murano glassmaking, and the technical stylistic evolutions that accompanied it.

Venice’s major water artery winds through marvellous palaces and slides under bridges full of charm. A fascinating combination of art and history, water and...
Read more

The Jewish Ghetto in Venice is more than 500 years old and it’s the most ancient Jewish quarter in Europe (1516): a small world...
Read more