Symbol of the city of Verona and the third largest Roman amphitheater in Italy, after those of Rome (the Colosseum) and Capua, the Arena of Verona was built around the middle of the first century AD to host gladiator fights, naval battles or shows with exotic animals. Since 1913, when Giuseppe Verdi’s Aida was performed here for the first time, it has hosted a prestigious opera festival every summer. Attending an opera in the Arena is an experience that takes your breath away, thanks also to the perfect acoustics, due mainly to its particular elliptical shape, which allows the singers’ voices and music to propagate perfectly inside, so as not to need amplification systems. Famous artists such as Maria Callas, Luciano Pavarotti, Placido Domingo have performed here. 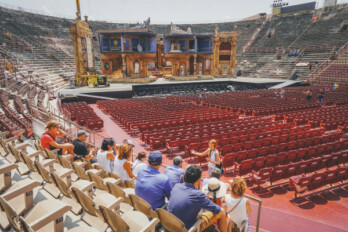 In recent years, moreover, the Arena is often the background to musical concerts, shows of various kinds, sporting events, such as the arrival of the Giro d’Italia or ice skating competitions, some of these broadcast on national TV. In Roman times the show took place in the center, with the audience all around, today instead the structure is used as a theater: one end hosts the stage, while the audience sits in a semicircle on the opposite side. Although in Roman times it originally had a capacity of 30,000 spectators, today it contains about half that number, both for stage requirements and for safety reasons. Architecturally, the appearance of this imposing amphitheater today is quite different from the original, especially because of the lack of the outer ring. The only part of the original monumental facade still standing is the so-called Ala (the Italian for Wing), composed of four arches, which has become the most iconic image of the Arena today.

In spite of the numerous transformations it has undergone, it is still one of the best-preserved Roman amphitheatres of the Peninsula, thanks to the systematic conservative restorations carried out since the sixteenth century. The Arena was built in stone from Valpolicella, the so-called Rosso Verona, a resistant and easy to extract limestone, with a special color that ranges from milky white to deep red. Walking through the long, semi-dark tunnels that run along the entire perimeter of the structure and coming out on the terraces, with the sudden glimpse of the inside of the amphitheater in all its majestic grandeur, is a unique emotion, which takes us back for a moment to the time of the gladiators and leaves us stunned in front of the Roman architectural genius.

Verona, the most romantic city in Italy, by bike

A guided bike tour is the ideal way to enjoy the city of Verona without stress, discovering new perspectives and entertaining even the little...
Read more

The ancient fortress of Castelvecchio, magnificent example of fourteenth-century engineering, after a careful restoration by the architect Carlo Scarpa, now houses an important art...
Read more 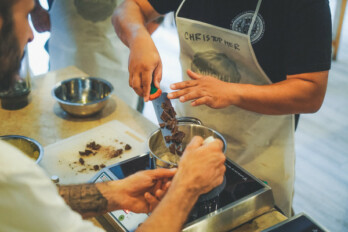 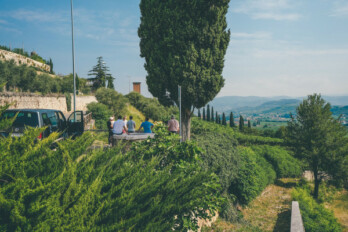