Despite barbaric invasions and various orders of demolition by the Church, it has remained faithful to its original design, dating back to the 2nd century A.D., at the time of Emperor Hadrian. 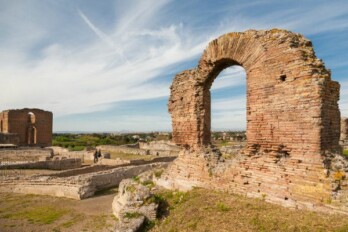 The Pantheon was the first temple in Rome to be built with a dome. Its circular design was conceived with the symbolic meaning of encompassing all the gods into a space of religious perfection. Everything inside the Pantheon is symbolic: the floor is still the same Hadrian and his priests walked on millennia ago and the majestic vault epitomizes the immortality of the Eternal City. Though conceived as a pagan building, the Pantheon was turned into a Christian church and named Santa Maria ad Martyres by Pope Boniface IV in 609.

The structure of the Pantheon is such a revolutionary invention that Brunelleschi himself visited Rome to study it and apply its techniques to his famous masterpiece, the Duomo of Florence. The hole in the centre of the dome is another ingenious aspect of the temple. This architectural element, through which the sunlight shines, illuminates the interior of the building without the need for lamps.

Though the Pantheon has undergone some bad times – as for a short period was even used as a poultry market – today it hosts the tombs of Italy’s royal family, as well as artists such as Raphael. The artist himself asked to be buried here to perpetuate his glory and legacy, so it’s no coincidence that the day’s last ray of sunlight shines directly on his tomb.

With its history and grandeur, the Pantheon is truly an unmissable stop!

In Rome, angels are all around. Whether sculpted in marble and standing atop bridges, frescoed into Renaissance churches, winged guardians can be found everywhere....
Read more