Galleria, the “living room” of the Milanese

For its elegance and its vocation as a meeting point for over 150 years, it can be considered the oldest shopping centre in the world.

To celebrate the Unification of Italy, between 1865 and 1867, based on a project by architect Giuseppe Mengoni, Milan built the Galleria Vittorio Emanuele II, named after the first king of Italy. The architectural work of this stunning arcade boasts a blaze of marble, stuccoes and mosaics and is dominated by an amazing iron and glass dome standing fifty metres high. Its centre – the so-called “Ottagono” – is surmounted by imposing mosaics representing different parts of the world (Africa, America, Asia and Europe) to celebrate the centrality of the city in the world’s global economic and cultural system. One of the oldest trade centres in the world, from the time that it was built the Galleria became a city favourite for evening strolls, a place of demonstrations and a meeting point for the Milanese bourgeoisie, artists, academics and musicians, including Giuseppe Verdi and the Futurists.

An integral part of the pulsating heart of the city for over 150 years, it is a monument, a covered arcade and home to exclusive shops and restaurants. Following its inauguration, dozens of elegant shops opened under its vaults. So much more than a shopping arcade, it exudes an air of luxury and is lined with boutiques (Louis Vuitton, Prada, Armani, Versace, Gucci, Borsalino and many more), landmark restaurants and cafés, including Savini and Camparino in Galleria.

For the more superstitious, there’s a ritual that you don’t want to miss. On the floor of one of the Galleria’s side wings, there’s a bull mosaic. According to tradition in order to avoid bad luck, tourists and Milanese alike head to the mosaic of the dancing bull, spinning around once and firmly grinding their heels into its testicles.
And for those who want a taste of tradition, just a few steps from the Gallery is Luini (his famous “panzerotti” are inimitable), while for those who want to try an authentic espresso and alternative coffee-based solutions, don’t miss the Lavazza flagship store.

Considered one of the most important and famous theatres in the world, the Teatro alla Scala has hosted the most revered names in the...
Read more

Castello Sforzesco is an imposing 14th-century turreted complex, still partially protected by an ancient moat. It tells the story of Milan, its dynasties and...
Read more 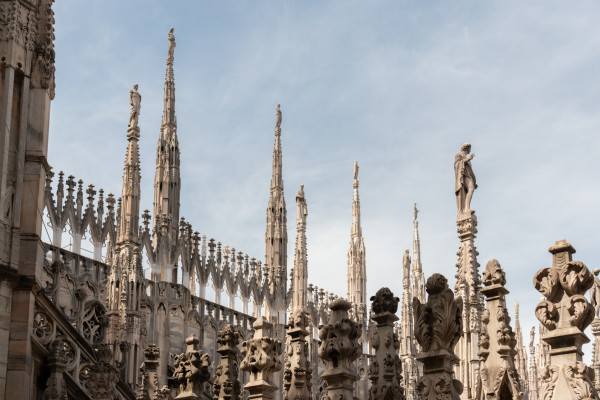