For its morphological characteristics, the Civita can be considered a sort of natural fortress, clinging to a plateau surrounded by the canyon and other deep overhangs. It extends to Piazza Duomo, in a perimeter once bounded by the Roman walls, to protect the noble families of the city, which since the Middle Ages, built here their sumptuous homes. 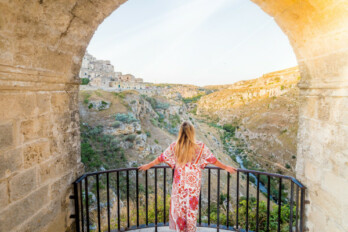 Many of these aristocratic palaces, pompous and highly decorated with frescoes and sculptures of exceptional workmanship, continue to perform their original function, such as the Archbishop’s Palace and others related to the Curia, others have undergone conservative restoration and are now home to museums, accommodation facilities, restaurants or art galleries. Among these, Palazzo Gattini, Palazzo Viceconte, today a luxury hotel whose terrace offers one of the most beautiful views of the Sassi and the Murgia Materana Park. And then Palazzo Bernardini, (former Palazzo Ferraù) built in 1448, which retains much of the furniture dated between the end of 1700 and 1802 and the original decorative elements and includes a beautifully frescoed ballroom.

Heart of the Civita is the imposing Cathedral in Apulian-Romanesque style, built between 1230 and 1270. The splendid Matera Cathedral is dedicated to the two patron saints of the city: Saint Eustace and the Madonna della Bruna. Unlike the interior, which over the centuries has undergone various transformations, the exterior retains almost intact its original form, dominated by a beautiful entrance portal surmounted by the statue of Our Lady of Bruna, with a central rose window surmounted by St. Michael the Archangel intent to crush the dragon. The interior of the Cathedral is a real treasure chest, many of which continue to magically emerge after each restoration. In 2003, for example, when following a series of collapses in the two aisles was necessary a new intervention of recovery, were brought to light two chapels richly frescoed that were part, most likely, the cemetery of the existing Benedictine monastery of Sant’Eustachio. In the same chapel is also preserved an exceptional stone crib made in 1534.

In the cathedral are preserved paintings of wonderful workmanship, among which the Byzantine fresco dating back to 1270 representing the Madonna della Bruna and the prestigious cycle of frescoes of the “Giudizio Universale”, dating back to the end of the 13th century. It too emerged during some restoration works and is the only surviving example of the original medieval pictorial decoration of the Cathedral.

This enormous cistern dug into the tuff represents the apex of a tradition linked to rainwater collection systems that began in Matera in the...
Read more

In the tufa caves that dot the rugged landscapes of the Murgia, over the centuries many monks have taken refuge and splendidly frescoed them....
Read more

Matera is among the most ancient cities in the world: the first settlements date back to prehistoric times. To quote the definition with which...
Read more
Share
Facebook
Twitter
Email
Linkedin
WhatsApp
Telegram 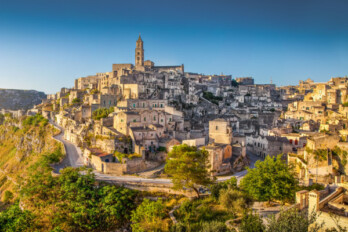