The Sentiero degli Dei (Path of the Gods) is a hiking trail that winds through the Lattari Mountains, connecting Agerola to Nocelle, a hamlet of Positano. Walking along it is easy to feel in paradise (maybe that’s why it’s called Sentiero degli Dei?): you walk among the scents of Mediterranean vegetation, with the incredible panorama of the Amalfi Coast in front of you, from Praiano to Punta Campanella and, further on, Capri. According to the legend, the Greek gods walked along this path to save Ulysses from the sirens who lived in the nearby archipelago of Li Galli. 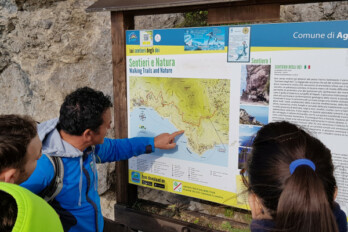 The path is about 8 km long, reaches a maximum height of 600 meters, and is considered among the most beautiful hiking trails in the world. Until the first half of the 19th century, when the current state coastal road was built, it was the only way to connect the villages of the Coast. The Sentiero Degli Dei (Path of the Gods) represents a natural and historical/cultural heritage unique in the world, remained almost untouched, which still lives between myth and reality. It is easy, walking along it, to meet the locals who pick fruit from the cultivated terraced fields, transport goods on the back of a mule or bring freshly milked goat’s milk to the village, in total harmony with the nature that surrounds them, as if time had stopped here. It is usually recommended to start from the highest point, beginning the walk from Agerola, more precisely from the hamlet of Bomerano, 650 meters above sea level, to reach the locality of Nocelle, and continue, through the ancient route of the Hellenic settlers, to Positano. Along the way there are canyons, viewpoints, natural springs and many caves, including the so-called Grotta del Biscotto, a cavity located at 528 meters above sea level, which is lost in the void, between cliffs and precipices. Not far away are still visible ancient rock settlements dating back to the time of the Saracens.

The Path of the Gods is a path of moderate difficulty, marked by usable colored signs, so it is virtually impossible to get lost and the conformation of the territory through which it winds is very easy and suitable for everyone. Obviously, it is advisable to wear comfortable shoes, possibly trekking shoes, and in the summer months to bring a hat, sunglasses and sunscreen and not to take the path in the hottest hours of the day. Once you reach Nocelle you can choose whether to return by retracing the same road back or descend the 1800 steps that separate the magnificent village of Positano. From here you can return to Bomerano with a bus or with the ferry that takes you to Amalfi, and then with another shuttle bus.

The unmistakable historical center of Amalfi is chosen as a destination by millions of tourists every year, attracted by its historical and artistic heritage,...
Read more

A place dear to the international star system, but actually already loved by the ancient Romans, Positano is a perfect mix of natural and...
Read more

The village of Furore, perched on the rock, is an en plein art gallery, formed by a hundred murals and sculptures. Its harsh and...
Read more
Share
Facebook
Twitter
Email
Linkedin
WhatsApp
Telegram 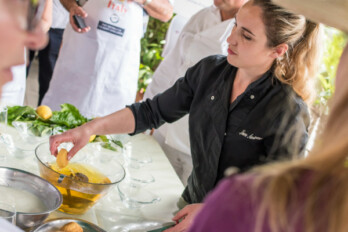 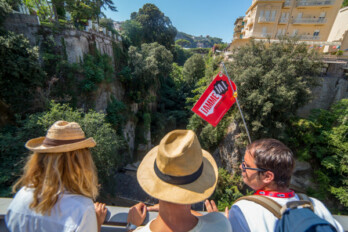