Furore, yet another pearl of the Amalfi Coast, a UNESCO World Heritage Site like the whole Coast, is part of the most beautiful villages in Italy. It is famous above all for its picturesque fjord, a deep inlet at the mouth of an overhanging valley, carved over the millennia by the Schiato torrent, which runs along the mountain until it plunges into the sea. The fjord is crossed by a suspension bridge about 30 meters high, from which, every summer, takes place a stage of the World Championship of diving from great heights. It is a place of wild and uncontaminated beauty, which transmits a feeling of peace and at the same time almost a sense of vertigo. The deep blue waves breaking on the shoreline and the surrounding rugged vegetation, frame the small beach where you can stop for a pleasant swim or just for a contemplative break. 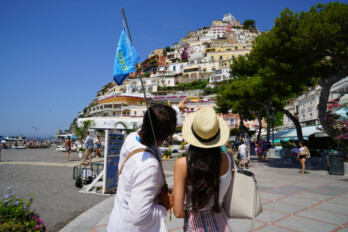 The fiord of Furore also houses a tiny fishing village which was inhabited, among others, by Roberto Rossellini and Anna Magnani at the time of their troubled love, at the end of the 1940s. A small museum dedicated to them is today hosted in one of the small houses. The center of the village itself is located a few hundred steps higher, in a strip of land 300 meters above sea level: it is a cluster of small houses clinging tenaciously to the rock face, which develops on winding curves, among olive trees, vines and lemon pergolas. Today Furore, thanks to the many graffiti of author that punctuate the streets enriching the streets of the ancient village and mitigating the harshness of the landscape, is a real open-air museum.

The custom of painting on the walls, however, in these parts is not something recent: the church of San Giacomo, built on a rock chapel dating back to the 11th century, in fact nestles incredible Byzantine frescoes, which tell the stories of Santa Margherita. In the church of Sant’Elia, instead, a splendid wooden triptych of the 15th century represents the Madonna between the saints Elia and Bartolomeo. It is also worth visiting the remains of the Eremo di Santa Barbara (Hermitage of Santa Barbara), a monastic site of the Early Middle Ages of which today there are only some ruins, including those of the homonymous church, near the cave of Santa Barbara.

Among the products of excellence of the enogastronomical tradition of Furore, besides lemons and piennolo tomatoes, we cannot avoid mentioning Fiorduva, a white wine, extracted from the vineyards which grow on the rocks beaten by the wind, a climatic condition which gives it a unique and unmistakable taste and makes it one of the main enological excellences of the Amalfi Coast.

A place dear to the international star system, but actually already loved by the ancient Romans, Positano is a perfect mix of natural and...
Read more

One of the most beautiful hiking itineraries in Italy, the Sentiero degli Dei offers a unique view of the Amalfi Coast and the island...
Read more

The unmistakable historical center of Amalfi is chosen as a destination by millions of tourists every year, attracted by its historical and artistic heritage,...
Read more
Share
Facebook
Twitter
Email
Linkedin
WhatsApp
Telegram